The DECam Local Volume Exploration Survey (DELVE) seeks to understand the faintest and most dark-matter-dominated galaxies. DELVE is a deep, multi-component survey to image the entire high-Galactic-latitude southern sky using DECam on the 4-meter Blanco Telescope at Cerro Tololo Interamerican Observatory in Chile. DELVE combines existing archival DECam data (including data from DES, DECaLS, and DeROSITAS) with 126 nights of novel observations to study dwarf galaxies over a wide range of luminosities, from the faintest dwarf spheroidal galaxies around the Milky Way (L ~ 103L⊙) to analogs of the Magellanic Clouds (L ~ 109−1010L⊙) throughout the Local Volume. DELVE consists of three observational programs:

These three survey components provide complementary insights into the abundance and properties of satellite dwarf galaxies in a range of environments. Combined with a unified theoretical framework, DELVE will enable exploration of the dependence of satellite properties on effects of reionization, host halo properties, and environment, offering essential insights into the galaxy–halo connection. The DELVE data are publicly available through the NOIRLab Astro Data Lab. 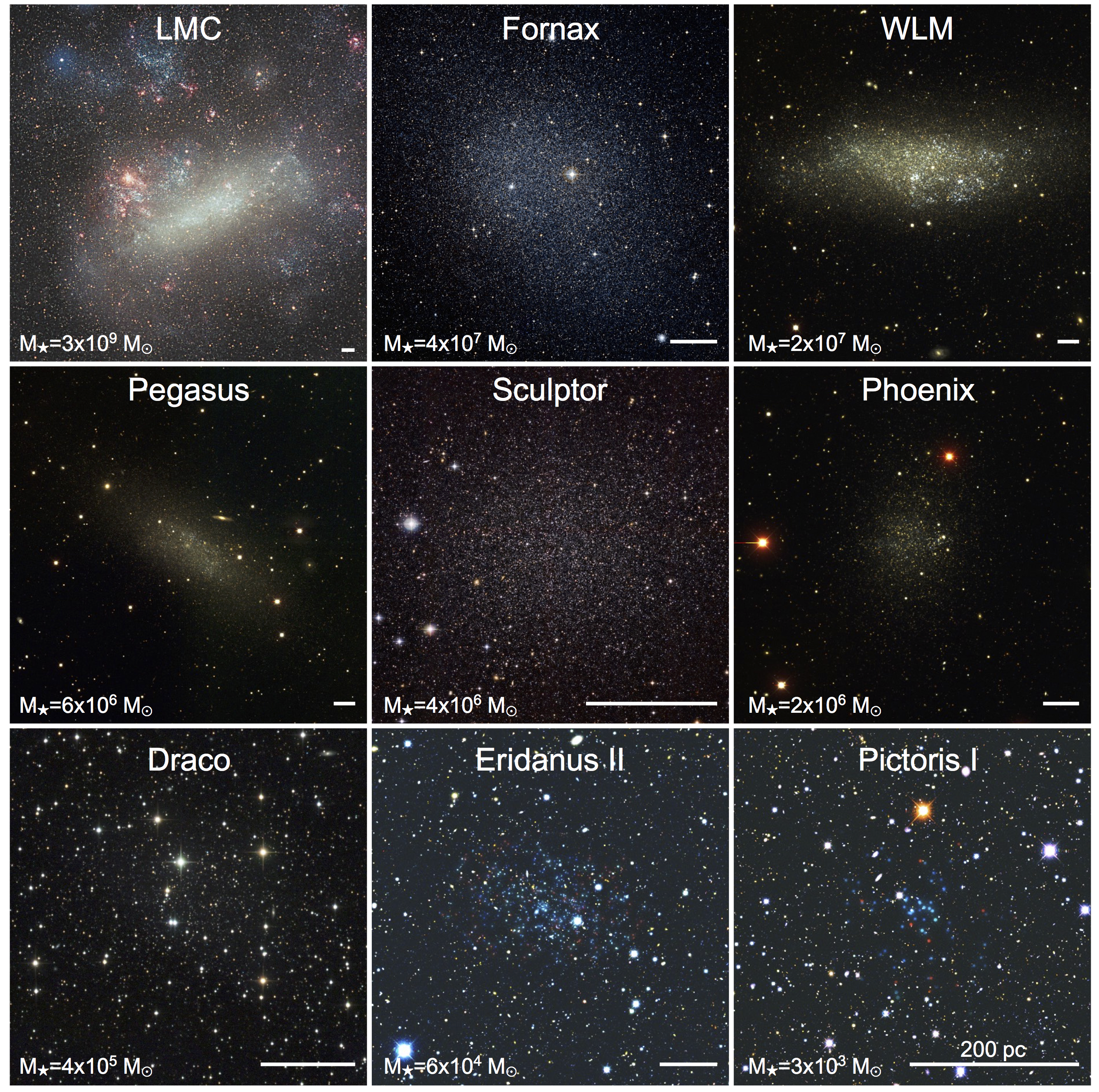 Local Group dwarf galaxies span more than a factor of a million in stellar mass and brightness. By imaging the entire southern sky, DELVE will allow us to find the faintest Milky Way satellites out to distances of ~50 kpc. These galaxies are important probes of dark matter physics and galaxy formation.
Image credit: Bullock & Boylan-Kolchin (2017).

The standard model of cosmology predicts that galaxies like our Milky Way inhabit large dark matter halos, which grow hierarchically by merging with and/or accreting smaller galaxies. There is ample evidence for this hierarchical paradigm on large scales, but small-scale tests are challenging due to the low luminosities of the faintest galaxies. Our Milky Way and its surrounding population of satellite galaxies offer a unique opportunity to study fundamental physics of dark matter and galaxy formation. The DELVE WIDE program will complete DECam coverage over the entire southern sky to address fundamental questions in near-field cosmology.

DECam has played a pivotal role in expanding the known population of ultra-faint Milky Way satellite galaxies. The demographics of ultra-faint dwarf satellite galaxies are sensitive to the particle properties of dark matter and to the physics of galaxy formation. One striking aspect of the DECam discoveries is the concentration of ultra-faint satellites in the vicinity of the Magellanic Clouds (MCs). This has reinvigorated the hypothesis that the MCs brought their own population of dwarf companions, and has provided an exciting opportunity to study the impact of environment on low-mass galaxies. DELVE WIDE will complete DECam multi-band imaging over the southern sky, and we expect to detect ~10 new satellites based on cosmological zoom-in simulations.

When satellites of the Milky Way stray too close they can be ripped apart by the tidal forces of the Milky way creating long, thin streams of stars. Stellar streams are difficult to detect due to their low surface brightness (~32 mag/arcsec2) and large extent on the sky (~10s of degrees). The contiguous, uniform coverage of DELVE will extend the search for stellar streams beyond the DES footprint. The fraction of stars contained within currently visible substructures and the morphology and composition of debris structures will tell us about the recent accretion history of the Milky Way, including the masses, orbits, and metallicities of recently accreted satellites. Stellar streams also probe both the large- and small-scale distribution of dark matter around the Milky Way: they trace the gravitational potential of the Milky Way over a large range of radii and offer a promising technique to test the existence of dark matter substructure below the threshold of galaxy formation.

The Large and Small Magellanic Clouds (LMC & SMC) are the nearest large satellite galaxies of our Milky Way. The proximity of the LMC and SMC make them ideal laboratories for studying fundamental astrophysical processes in detail. As the Magellanic Clouds accrete onto the Milky Way, they provided a unique opportunity to study the formation and evolution of interacting dwarf galaxies. Recent studies using data from Gaia and various DECam surveys discovered remarkable, extended stellar structures in the periphery of the Clouds and tidally-induced galactic structures in their main bodies. These substructures highlight the complexity of the Magellanic system. Deep, accurate, and complete characterization of stellar debris is critical for fully understanding the history and evolution of these interacting dwarf galaxies. The discovery potential for tidal debris and other structures around the MCs is greatly magnified by deep, contiguous imaging.

DELVE will contiguously map the periphery of the MCs (25 deg from the LMC center and 15 deg from the SMC center) to a depth comparable to the Survey of the MAgellanic Stellar History (SMASH). The resulting homogeneous map of Magellanic stellar populations will trace the highly disturbed LMC/SMC disks and other faint stellar structures in unprecedented detail using the much more numerous old main sequence turn-off stars as tracers. A map of stellar debris can be combined with the observed gas distribution to probe hot baryonic matter and to trace the Galactic dark matter halo. A complete census of tidal features around the MCs will allow us to fully picture their dynamical evolution. In addition, deep color-magnitude diagrams from DELVE will provide high-resolution, spatially resolved star formation histories at previously unprobed angular separations from the MCs. These observations will offer new insights into the role of tidal interactions in shaping Magellanic Irregular galaxies.

In addition, it is now believe that the MCs likely possessed their own populations of smaller satellites galaxies. As the MCs fall onto the Milky Way, their satellites have been stripped and captured by our Galaxy. However, we may still be able to distinguish satellite that originated with the MCs based on their location, orbits, and/or composition. Contiguous imaging by DELVE should help to increase the number of satellite galaxies found around the LMC & SMC. 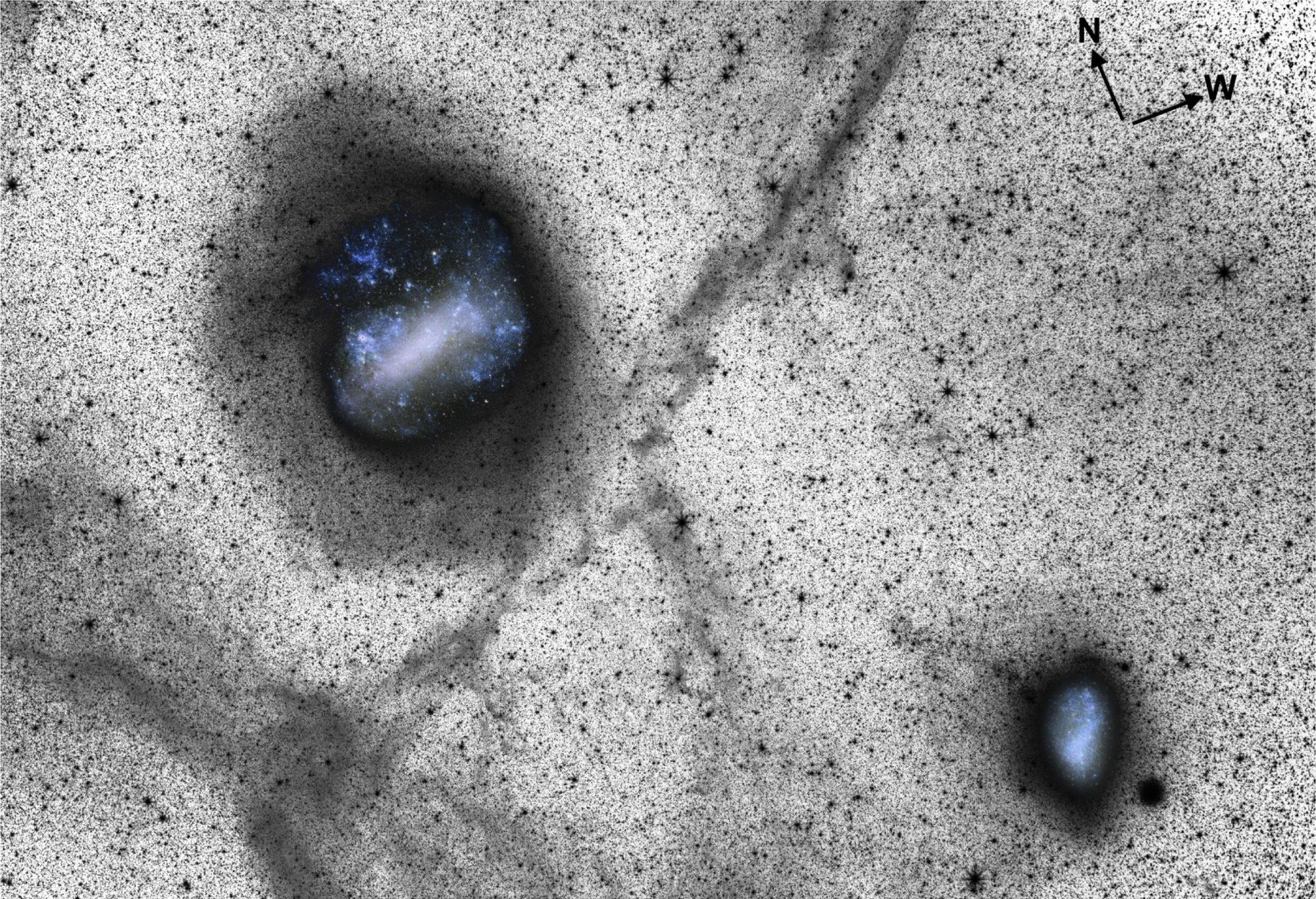 A complex web of stellar substructure (gray scale) surrounds the Large (upper left) and Small (lower right) Magellanic Clouds. DELVE will perform the deepest wide-field imaging of this region of the sky to date to study the structure and star formation history of the periphery of the Magellanic Clouds.
Image credit: Besla et al. (2016).

Sextans B (pictured above) is one of the Local Group field dwarf galaxies that DELVE observes. The heirarchical model of galaxy formation predicts that even small galaxies like Sextans B possess their on population of tiny satellite galaxies. DELVE studies the stellar periphery and satellite populations of four isolated field dwarf galaxies (Sextans B, NGC55, NGC300, and IC5152) to better understand galaxy formation in this faint regime.
Image credit: DELVE Survey (2019).

The standard cosmological model predicts that structure formation is essentially self-similar at all scales, i.e., the number of dark matter subhalos (which in turn may host dwarf galaxies) associated with a given galaxy is roughly proportional to the host galaxy’s mass. This implies that even moderate-sized dwarf galaxies like the Milky Way’s largest satellites the LMC & SMC should host their own even smaller dwarf galaxy satellites. The recent discovery (mostly using DECam) of many ultra-faint galaxies in the vicinity of the MCs may be a spectacular confirmation of this model. However, the fact that the MCs reside within the Milky Way halo makes it difficult to definitively identify which ultra-faint galaxies arrived as companions of the MCs. Finding satellites of isolated galaxies of similar mass to the LMC/SMC will be essential to assess the satellite/host demographics of systems in environments outside the influence of a larger host.

To build a sample of satellite dwarf populations, DELVE will perform deep, wide-area imaging around four isolated nearby galaxies: Sextans B, NGC 55, NGC 300, and IC 5152. These dwarf galaxies have stellar masses within an order of magnitude of the SMC (at the low end) or LMC (higher stellar mass). The selected galaxies are distant enough (~1-2 Mpc) that we can plausibly map their entire extent, but nearby enough that we can see the brightest individual stars that reside in them. DECam is ideal for this project because it is on a relatively large telescope, enabling us to resolve individual stars on the red giant branch of the target galaxies, and it has a large field of view that facilitates mapping of large areas to search for their dwarf companions. Cosmologically-motivated simulations predict that we should find a total of about 6-20 satellites around our sample of four galaxies. A complete census of dwarf satellites around low-mass galaxies is needed in order to statistically assess the (stochastic) variation in satellite numbers and properties between hosts, as well as any effects due to the environment in which the host galaxy has evolved. We will also search our deep imaging for globular clusters associated with these nearby MC analogs, map their stellar density profiles to search for extensions or low-density features that may be signs of hierarchical growth via the accretion of smaller satellite galaxies.

DELVE combines public archival data with devoted observations to cover the entire high-Galactic-latitude southern sky. DELVE observations started in February 2019, and have collected > 17,000 DECam science exposures as of August 2021. A map of the existing DECam coverage is shown below with darker colored regions indicating more overlapping exposures. Public releases of the DELVE data are available through the NOIRLab Astro Data Lab. 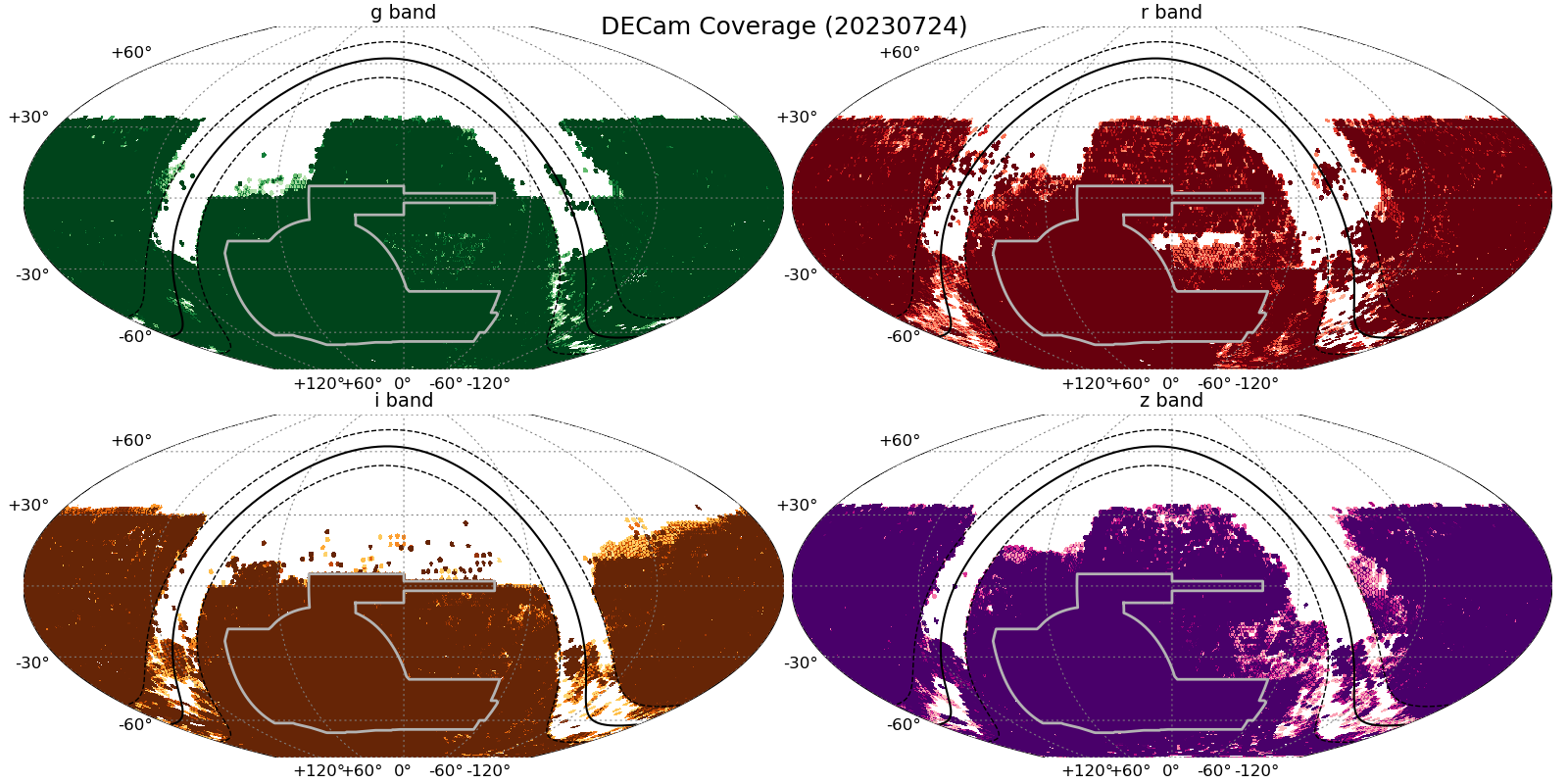 If you are interested in getting involved in DELVE, you can read more about membership in the DELVE Policy Guidelines.

Below is a list of scientific papers from the DELVE Collaboration or using the DELVE data.